The Pain of a Mother

Any person that has truly face and felt her/his own repression is genuinely compassionate and understanding towards others, even if we have to walk away from people that can’t bear to face and feel their own repression to protect ourselves from being used as their scapegoat or poisons container to unconsciously alleviate their own repression. In the excerpt below from the preface of Paths of Life you get a window to see the pain of Alice Miller from not having come into her insights in time to make a difference in the life of her older child and how she felt the need to share with prospective young parents the insights she discover later in life and wished she had when she was a younger mother, so they don’t make the same mistake she did.

Of course I have compassion for her son that is in the same boat as most of the people in the rest of the world of having to find the courage to face and feel his own repression, if he truly wants to break free and I have compassion for Alice Miller that suffer in her childhood like most people in the world and the terrible pain she suffers as an adult when she realized that she had hurt her own child by not standing up to her husband and defend her child from his abusive father.

I am not a mother, but I feel this has to be one of the worst pain for a mother or father to feel that we hurt our own child and that he is stuck in an emotional prison or time capsule because of what we did or not did when they were defenseless little infants and this is why most parents deny the truth to protect themselves from feeling this intense pain, and this is why I never had children, because I could feel I did not have what was needed to raise a conscious human being and that I would not be able to bear the pain of hurting a child I brought into the world, but I am very grateful Alice found the courage and strength to feel her pain and became honest with herself and owned up to her mistakes as a young mother and worked very hard to write her books to warn the rest of the world of the consequences of childhood repression, most parents can never own up to their mistakes towards their children no matter how much evidence we put in front of them and go on blaming the children and unconsciously and compulsively use them and others endless to alleviate their own repression.


As Alice Miller says: “As I’ve aged, I’ve grown more tolerant and patient; I find it easier to wait and let people take the time they need to follow my trains of thought. What helped me to become accommodating was the fact that in contrast to twenty years ago, I no longer feel alone in what I know. Since then both experts and lay people have been able to confirm my conclusions by their own experiences. I no longer have to prove anything.


And yet I still feel a need to share with others things that came to me only late in life. The result does not claim to be literature, we are not dealing here with “art for art.” For my stories are actually based on simple, conscious intentions to inform people and encourage them to think. For me, as for many women, it was very painful to realize that as a young mother I had missed so much, not only for my child but also for myself, simply because I did not know enough. It hurts to see how with more information many things could have turned out better and that much cannot be made good again. My stories arose from the wish to spare other people what I have suffered myself.” Alice Miller ~ Paths of Life, preface

The quote by Marshall Rosenberg in the link below is so true. 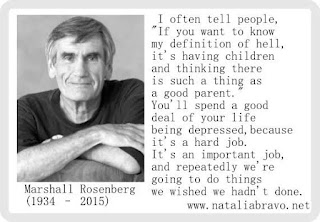 Also, read The Courage of Alice Miller Was Astonishing
Posted by Sylvie at 8:55 PM