Narcissists are Secretly Suicidal and Homicidal

Sylvie Imelda Shene: I just like to share that sharing our experiences can save someone's life or from losing it mentally. The young reporter that killed his colleagues on live television lost it mentally because he didn't understand what was happening to him and his intense feelings that I am sure without a doubt, they were triggered by a recent betrayal on the job.

And yes malignant narcissists, sociopaths, and psychopaths always play the victim role and make the real victim appear to be the abuser.

It's all game for the malignant narcissists, sociopaths and psychopaths and doesn't even care if they put their own and the lives of others in danger in the process, it's all about winning the game at any cost.

Malignant narcissists, sociopaths, and psychopaths are secretly suicidal and homicidal, but they don’t have the courage to do it themselves, so they play mind games trying to manipulate others to do their evil acts, so they can go out playing the ultimate victim role and they don’t care if innocent victims are hurt or killed in the process also, it’s all collateral damage in their eyes, they only care is they themselves to be seen in the public eye as the victim and their real victim to be seen as the abuser, so the more we educate the public about the malignant narcissists, sociopaths and psychopaths' games and how they are wolves in sheep’s clothes, we will never know if we are preventing one more tragedy from happening in our world. Keeping silent can destroy lives and can kill. 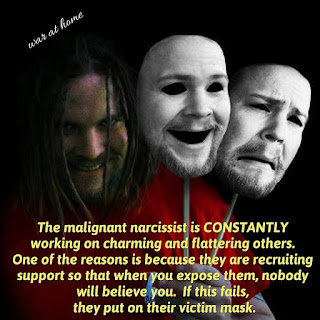 Just as Marie –France Hirigoyen says in her book Stalking the Soul: “The victim needs to act, but because she is blocked by the hold over her, she can only find her freedom in an extreme gesture. To an outsider, any impulsive action, especially a violent one, is considered pathological. The person reaction to provocation seems responsible for the crises. Guilt in the eyes of the abuser; she appears like the aggressor to outsiders, who don’t understand that she can no longer live trapped in a horrible situation. Whatever she does, she can’t set herself free: if reacts, she is responsible for starting the conflict and is she doesn’t react, the deadly stalking of her soul continues.
As he drives his victim to destruction, the abuser gets that much more pleasure from pointing out her weakness or unleashing her violence. He makes her feel debased and unworthy. Depending on her reaction, she is described as temperamental and neurotic, alcoholic, or suicidal. The victim feels defenseless and tries to justify herself as if she were, in fact, guilty. The abuser’s pleasure double: he bamboozles or humiliates his victim and subsequently rubs her nose in her humiliation. While the victim dwells on her guilt, the abuser benefits from the situation, making sure to cast himself as the victim.
Justification becomes impossible when nothing is said and no reproach is made. Desperate to find a solution to this horrifying impasse, the victim may be tempted in turn to use innuendo and manipulation. The relationship then becomes ambiguous: who is the abuser and who the victim. The ideal outcome for the abuser is to succeed in making the other “evil,” which transforms the evil into something more normal because it is now shared. He wants to inject the other with what is bad in him. To corrupt is the ultimate goal.
His greatest satisfaction lies in driving his target to destructive acts or, in a larger framework, leading several individuals to finish each other off.
All abusers, sexual or emotional, try to drag others into their orbit and distort the rules. Their destructive capability depends on the propaganda they disseminate among victims’ families, friends, and associates, showing to what extent the victims are “evil” and that it is, therefore, normal to blame them. Sometimes they succeed and seduce allies by ridiculing and scorning moral values. Not leading others into a circle of violence means failure for abusers and, therefore, becomes the only way to stop the spread of the abusive process. ...Physical violence can be testified to be outside evidence: eyewitness, police and medical reports. With emotional abuse, there is no proof. It's a clean violence. Nobody sees anything. "
”
Yes, many professionals out there are sicker than their patients and they transfer their own unresolved repression into their patients making them sicker than they already are!
Many professionals out there, do great analyses and understand well the reasons for mental illness, depression, addictions and chronic illness, that is linked to childhood loss and trauma, and I quote few other professionals in my book to prove that are out there, other professionals saying what Alice miller says, but how they go about to heal those traumas, they use the same old tools like yoga, meditation, 12 steps and controlled drugs, that all it does is manipulate people's feelings, and repress their authentic feelings all over again. And as long people go on repressing their authentic feelings, they will be driven by them into the state of repetition compulsion of doing to others, themselves or both, especially their own children, what once was done to them, when they were defenseless little children.

It’s the repression of our authentic feelings that cause us long-term harm and not the trauma itself. Just as I wrote in my book A Dance to Freedom, page 61 and 62: “Alice Miller often talks about the “life-saving function of repression.”27 As defenseless little children, we have no choice but to subconsciously repress our negative feelings for two reasons. First of all, we need support from others. And second, we just don’t have the ability to understand how the people we must rely on could actually be cruel to us. In the short-term, repression can have a positive effect in traumatic circumstances. But the subconscious actions that we think are saving our lives as children are what really keep us down as adults. In fact, Alice Miller believed that it wasn’t so much the traumas we experience that harm us, but “the unconscious, repressed, hopeless despair over not being allowed to give expression to what one has suffered and the fact that one is not allowed to show and is unable to experience feelings of rage, anger, humiliation, despair, helplessness, and sadness.”28 Abused and otherwise traumatized children are forced to repress their true feelings unless they’re lucky enough to find someone to comfort them. But because enlightened witnesses (and even helping witnesses) aren’t always readily available, most of us develop what Alice Miller calls a false self — usually for the sake of our parents — only to pay for it later in life. In an article entitled “The Essential Role of an Enlightened Witness in Society,” Alice Miller writes that “it seems clear to me that information about abuse inflicted during childhood is recorded in our body cells as a sort of memory, linked to repressed anxiety. If, lacking the aid of an enlightened witness, these memories fail to break through to consciousness, they often compel the person to violent acts that reproduce the abuse suffered in childhood, which was repressed in order to survive. The aim is to avoid the fear of powerlessness before a cruel adult. This fear can be eluded momentarily by creating situations in which one plays the active role, the role of the powerful, towards a powerless person.”29 This is how the vicious cycle of parental abuse continues for generations. And in extreme cases, the repetition compulsion can lead to violent atrocities against humanity.”


Also just I wrote in my open letter to the journalist Don Lemon: "Hi Don,I agree with your comments about the shooting of the Virginia television journalists killed by a former co-worker that the shooter lifestyle is irrelevant. And I also agree with you that people need to learn to manage their emotions. ...Feelings and emotions don’t kill anyone, only actions hurt and kill and if people understand their emotions and learn how to consciously feel them in the right context, they will not be driven by them to hurt themselves and others. I don’t know if you received my letter that I sent you awhile back and I published on my blog as an Open Letter to the Media. One of the reasons people resort to violence is because violence works to get the media’s attention to pay attention to their despair and to listen -- but sadly the media only pays attention the criminals last act -- if society learns to recognize the red flags of their despair and listen to them before they resort to acts of violence in a final attempt to get the world to pay attention. Just I wrote in my book A Dance to Freedom, page 137: “Every adult in the world has the capacity to give up these illusions and free themselves from the chains of depression that result from emotional repression. Unfortunately, most adults do the opposite. They cling to the false hope of illusions, only to let current events trigger depressive episodes whose root causes are the lingering pains of childhood that haven’t been dealt with. Everything we become as an adult is connected to our childhood: Our experiences are a chain of events that bring us to the present moment, for better or worse. A criminal is never guilty just by himself. If society at large could ever find the courage to learn from the chain of events that occurred in each criminal’s life from day one, we could prevent many future crimes and a lot of unnecessary suffering.”