The Word "Safety" with Regard to Women 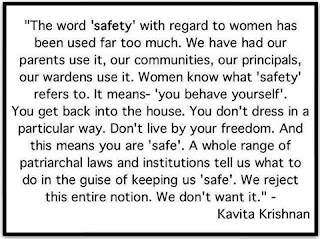 No, I don't want safety if it means losing myself and my freedom. I will risk it any day!

Since I can remember has been a constant fight for my freedom, independence, and autonomy. People trying to repress me always say is to keep me safe and to protect me! The sociopaths at my job of nine and half years, when they came up with the messy abusive package procedure, they also said to me that was for my protection! I was offended that they were too emotionally blind to see that I could see clearly that the package procedure they came up with was to set me up for failure so they would have something to pin me down with and put the little woman in her place.  As you can see by the words I wrote in an email  to another resident and I published in my blog Sunday, July 5, 2015 "I Guess the Shoe Fits Him":

Mr. K, the resident in the chair of security that I shared with the article about sociopaths, thinking he might help me. The security company said in the letter that he assumed I was calling him a sociopath. I guess the shoe fits him! Because as we NOW know, he was in on the plotting too. Once while back, he came to the gate and I had the TV on, it was on the CNN channel that was talking about the terrorism in the Middle East and he mentioned to me that the terrorism is solved by bombing all the Middle East, including women and children, kill everybody! And I told him: They think the same thing about us -- unless the whole society deals with the roots of what breeds terrorism here and aboard, always will be terrorism no matter how many wars we create and how many people we kill. Isn't this the talk of a sociopath?!  When they created the abusive and messy package receiving procedure, Mr. K came to the gate and I tried to explain to him how flawed their system was and he says to me: I am trying to protect you! Trying to protect me my ass. I knew he was lying then and now there is proof that he was lying. Every time someone tells me they are trying to protect me, it really means: I am trying to control you and repress you to manage my own fears. Just like I said in my blog They are Allergic to my Aliveness:  “And like my family they are using the same tactics by saying that is to protect me, but what they want to do is to put me in my place and show me who is in charge to manage their own fears and keep their own image, repression and little illusions intact. Just as Alice Miller says: “Conditioning and manipulation of others are always weapons and instruments in the hands of those in power even if these weapons are disguised with the terms education and therapeutic treatment.” For Your Own Good, P. 278

I share the same article with another resident and this person didn’t assume I was calling her a sociopath, as you Know XX was not part on the plotting to destroy me. As you see by XX’s words below, she thanked me for sharing the article about sociopaths with her.
“This [article] is very interesting and thank you.  I started to tell you this morning that when she told ME who she would distribute, that irritated me… …I may also mention that in the 25 years I've been a S resident, we have never had our guard gate run as efficiently as it is at the present time.  I will ask him if the evidence of package abuse supports the severe response by the board  --- how many requests for a tighter process has he received from residents -- etc.  I will also suggest that since this action defies sanity, could there possibly be another motive somewhere lurking in the shadows?  It simply makes no sense unless they have info I've not rec'd!  Well, we'll see -- hugs, X”
Also, the words I wrote below in another e-mail  and i published in my blog, February 14, 2015  "Cowards always get Others to do the Dirty Work for Them" -- talking about  the property manager that was really the one that started the very well methodical orchestrated smear campaign came to mind: 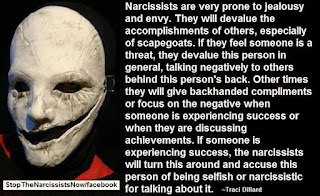 Reading the quote above, the property manager at the community where I worked comes to mind. She was very jealous of me and she and the board manipulated by her came up with a messy packages abusive procedure, but then I came up with a package procedure that was really efficient and she comes up to me saying: I heard you created a very efficient package procedure and I just ignored her, because I knew she was full of it and then she says: I am trying to give you a compliment! She was trying to give me a compliment my ass, she was seeing what else she could come up with to bring me down. She has everyone fooled, but she never had me fooled from day one, I knew I could not trust her. These words from an article I just read could not be truer: "13. Suspect Flattery

Flattery and compliments are different, and you should learn to tell them apart. Sociopaths use flattery as a tool for manipulation." Read more HERE
Yes, I can tell when someone is genuine and authentic or when someone is trying to create a smoke screen to blind me and manipulate me.
The quote below also articulates exactly what the property manager did. Totally she wanted to destroy me! And she got the new guy and the Security Company to finished the job she started, she is talented!!! 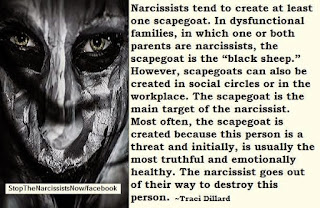 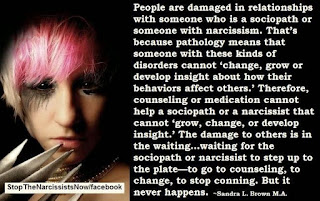 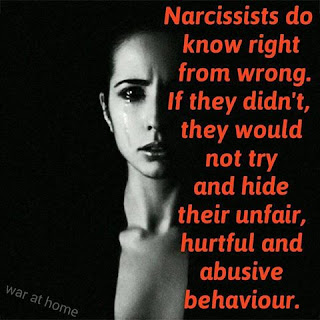 Yes, they were very sneaky and very good at hiding, doing their evil acts behind closed doors.
To read more about my experiences with the mob of sociopaths or narcissists at my last job read my blog Experienced Knowledge
Posted by Sylvie at 8:12 PM