Surprising Book Facts: Becoming Your Own Own enlightened Witness 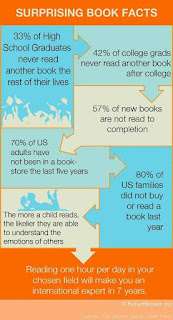 Comments from the sharing of the picture above on Facebook

Heleen Bos Do you think these statements are facts Sylvie..?


Sylvie Imelda Shene Not sure, Heleen., But from my experience with most people I know, these facts are pretty accurate.


Sylvie Imelda Shene Heleen, also from my personal experience I can testify that this statement in the picture is pretty accurate; "Reading one hour per day in your chosen field will make you an international expert in 7 years" I started reading every psychology book I could get my hands on in 1995 and by 2003 I had become an expert! My own enlightened witness or therapist!

Like I wrote in my book page 128 and 129 "Meanwhile, I was reading every self-help book I could get my hands on. You name it, I probably read it! And I was eating it all up, hoping that something would finally work for Marty and me.

... Marty wasn’t listening to anything I was saying, ...But I kept reading, and talking, and reading some more. I read every word in every book because I didn’t want to miss a single clue that could lead me to happiness. And that’s how I found Alice Miller. Way back in the bibliography of Melody Beattie’s Codependents’ Guide to the Twelve Steps, I found a reference to Alice Miller’s third book, Thou Shalt Not Be Aware: Society’s Betrayal of the Child. I knew I had to get it because of the subtitle alone, because I had grown up feeling betrayed by everyone in my life. And when I started reading the book, I immediately knew that I had found someone who understood me. Unfortunately, at the time I was still under the influence of other techniques and treatments that promised a quick fix. The people in my 12-step group kept telling me that all I had to do to change Marty was to change myself, and I was seduced by the simplicity of it — even though I had already gone for years with no results! I’ve touched on this a lot in this chapter and elsewhere in this book, particularly in the section about #DrJulioMachadoVaz — the psychologist who used me for sex — but I really want to reinforce the idea that so-called therapists and gurus only substitute one dangerous illusion for another. As Alice Miller writes, “What can happen when a doctor doesn’t stop at self-deception in his flight from pain, but deceives his patients, even founding dogmatic institutions in which further ‘helpers’ are recruited to a faith advertised as scientific ‘truth,’ can be catastrophic.”64

The key to effective therapy is learning how to use your present triggers productively. They can help us clarify, understand and consciously feel our intense emotions within the context of our own childhoods without losing our adult consciousness. A good therapist can help us regain our adult consciousness if we lose it and encourage our autonomy, so we can deal with present issues from an adult perspective. But when a therapist regresses us to the state of the desperate child we once were and keeps us feeling old pain over and over again, that just reinforces our dependency, keeps us vulnerable to all kinds of manipulations and makes our addiction to pain harder to shake. Why do people keep punishing themselves?

As Alice Miller writes, “… the awareness was borne in upon me that in a state of regression it is not possible to judge the competence and integrity of the person one has turned to for such guidance. This opens up all kinds of opportunities for abuse. The intensive phase with which primal therapy begins is an immediate obstacle to the formation of a balanced, critical, independent assessment of the therapist’s abilities by the client. The fact that the attendant uncritical and irrational expectations of healing and ‘salvation’ can lead to the establishment of totalitarian sects is borne out by the crass example of mass abuse at the hands of the exponents of ‘feeling therapy’ as described in detail by Carol Lynn Mithers in her book Therapy Gone Mad: The True Story of Hundreds of Patients and a Generation Betrayed (1994). But this study was possible only after the community she describes had disbanded, something that frequently takes decades. Today we know that such groups exist and that members of sects are done irremediable harm before they become aware of the fact.”65 In another book, she goes on to say, “The thing that concerns me most about cult groups is the unconscious manipulations that I have described in detail in my work. It is the way in which the repressed and unreflected childhood biographies of parents and therapists influence the lives of children and patients entrusted to their care without anyone involved actually realizing it. At first glance, it may seem as if what goes on in cults and cultlike therapy groups takes place on a different level from the unconscious manipulation of children by their parents. We assume that in the former instance we are in the presence of an intentional, carefully planned and organized form of manipulation aimed at exploiting the specific predicament of individuals.

… First, they had learned how to reduce people to the emotional state of the helpless child. Once they had achieved that, they also learned how to use unconscious regression to exercise total control over their victims. From then on, what they did seemed to come automatically, in accordance with the childrearing patterns instilled into them in their own childhood.”66 Most people who search for answers never actually find them, because people suffering with their own repression are the ones who practice traditional therapies. Since the beginning of human history, priests, teachers, gurus, psychics, doctors, philosophers, and psychologists have all duped people into thinking they could provide real assistance when it was never possible because the healers were also victims of their own childhoods."

Heleen Bos Sylvie Imelda Shene thank you for your carefull response. I am sorry there was a therapist who did that horrible things to you when you were vulnerable! So happy that you've found the books of Alice Miller and felt understood. I am also very thankful for knowing her work! Warm wishes, Heleen