Since writing this blog, my ex-boss, who the property manager recruited to do her dirty work, killed himself in a standoff with the local police after robbing a bank on March 11, 2016, that by coincidence was my birthday! So, the property manager does have blood on her hands after all, because I know without a doubt, if she had not started this psychological warfare against me, he would still be alive – he was her collateral damage – when people start wars someone always gets hurt or killed!!! I was her target to destroy, but when was one of her helpers to lose his mind and self-destruct, everyone involved became silent, and now is a big cover-up that involves the FBI, the US Marshals, and the media. It's a shame he was not strong enough to stand up to do the right thing and let himself become a puppet of the property manager -- he paid a high price for it. Puppets never have a good end. If it was me, the little woman to commit a crime my name and face would have been splashed all over the news stations! And then all probably go on TV talking about how disturbed the little woman was -- to discredit me and my book -- and make a name for themselves by standing on my head. And all probably say that you need God in your life, my ex-boss was a Mormon, a man of God, but he was the one to lose his mind, but now is a big cover-up. I could see their dirty games and traps so clearly. Read more in the link below:

You have been in my mind and I was thinking about writing you when got your e-mail! So happy to hear from you!

I know you are not criticizing me. I was thinking the same thing, that maybe you were thinking I was criticizing you in my last e-mail. I hope you know that I was not criticizing you. It reminds me when the property manager at my last job accused me of not taking criticism well. I don’t take criticism well when I know someone is accusing me maliciously and plotting to try to destroy me by projecting herself into me in order make herself look good and make me look bad.  And the fact is: she is the one that doesn’t take criticism well, and she got really vicious when I confronted her about passing the buck every time someone makes a complaint to her, and she never solves any problems herself that she only cares about is covering her ass.  That’s all she ever did pass the buck and cover her ass. 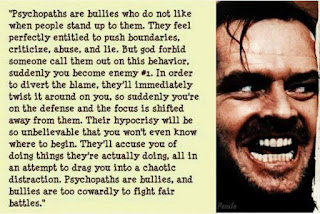 The quotes below describes exactly what happened at my last job after I published my book! The property manager recruited a team of flying monkeys taking turns doing her dirty work and she got the new guy and the security company to finish the job she started, this is how cowards work! We all know who the real culprit is!? The property manager!!! 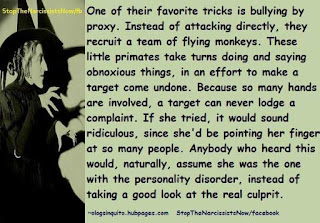 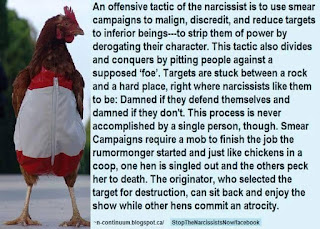 Driven by Jealousy to Hurt Others

I was born to expose the bad people in our world wearing sheep's clothes, so I did my job well at my last job because it sure did bring out their true colors! 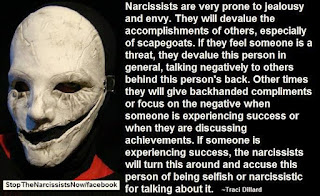 Reading the words in the article What Really Makes Narcissists Tick, the property manager at my last job come to mind, she got so jealous and envious of my success of publishing my book, that she had to do everything in her power to try to destroy me to transfer her bad feelings into me, so she could feel better and superior again, but she was not able to and I'm sure she is suffering from depression-like never before and probably taking medication.

“The characteristic subjective experience of narcissistic individuals is a sense of inner emptiness and meaninglessness that requires recurrent infusions of external confirmation of their importance and value. . . . When the environment fails to provide such evidence, narcissistic individuals feel depressed, ashamed, and envious of those who succeed in attaining the supplies that they lack.”

While going through the dark cloud  cast over me by the sociopaths at my last job, I had to have a lot of talks with the child within me and reassure her that everything was going to be okay, that we were not dependent and defenseless on these dark people, like we were as a small, powerless and defenseless child, and I would find another job to take care of us in no time, because the child in me got very angry at the present betrayal and for very short brief moments, the child within me  wanted to lash out in ways that could hurt us in the long run and this was exactly what the sociopaths were hoping I would do, they wanted me dead, in jail or in mental hospital, so they could discredit me  and my book.

I kept telling the child within me that had the right to be angry and the anger was very much justified, because their lies and actions were very hurtful, but if we acted out in anger we would be as evil as them and would hurt us, not them, and then we would be exactly where the sociopaths want us to be, acting out these cowards own evil transferred into me, they were pure evil, because they knew exactly what they were doing with their lies, mind games and schemes.

I never had experience in my whole life someone wanting to consciously hurt me to this extreme so bad, it was a game for them, they were very good at their game, but they lost, because I removed their masks and I exposed their wicked games and how evil they were.

In order to keep their own illusions and protect their false image of "good people" and "good parents", they needed to destroy me; they were nothing but cowards, but sadly this happens everywhere in our world.

I could not agree more with the words in the quote below by Robert Reich! When I got hired nine and half years ago, I was invited to board meetings, but after they read my book and found out I was not one of them, but I was a real honest person that could see everything and everyone clear, it made them uncomfortable, so they start having board meetings how to destroy me and of course I was excluded from their meetings to destroy me! But I didn't need to be in their meeting, because I knew exactly what they were saying and doing! Overnight my opinion no longer counted and I became their number one enemy they needed to destroy so they could go on with their lies, facades, and illusions as usual. When I would question the property manager, she always answered: “that’s not how we do things here!” of course not, the way they do things there is the fascist way and not in a democratic way! 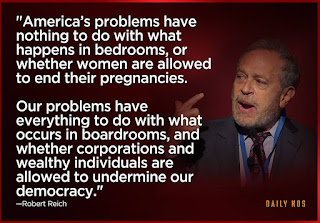 Maybe you still need to hang onto the illusion of your mother’s illusion of love, because you still too afraid and don’t trust yourself that you can keep standing by yourself on your own two feet, but the truth is: if you had experienced true love as a child you would not be so fearful of trying new things like moving to a new apartment.  It took me over 40 years to see clearly that most love given to me over the years was not real, but just an illusion of love, sometimes when I need help from others, I accept temporally their illusion of love, until I can get on my feet again. Most people are just acting as if personality, pretending to be loving, giving an illusion of love that can end at any time.  Everyone at my last job acted nice to me and pretending to be kind and loving towards me, but after my book was published, most people’s love ended overnight! If their love was real, they would still love me after reading my book and their love for me would have grown instead of ending, because I wrote a good honest book and I should be praised for my hard work and honesty and not rejected. Thank goodness I am not dependent on others praises and opinions, otherwise, I would have been in big trouble.

You are right a lot of people are in a symbolic way rescuing the child they once were by rescuing a cat, dog or any other being, but they can’t feel their own pain of having been emotionally and sometimes physically abandoned themselves as small children. I did this myself with my first cat, but now I can help an animal or any other being without using it to distract me to  avoid from feeling my own painful feelings, and I do enjoy the cats company and taking care of them and loving them, and I enjoy the love they give me back. I totally treated my first cat like a baby! I got him when he was a little kitten and I even bathed him like a baby and he learned to like water so much that when I took a bath, he would jump in the tab with me! :-) I miss him.  I never let the cats getting in the way or distracting me from doing things I really want to do, but I miss them when I am gone for a long time, but I have to be honest that I have used the cats as an excuse to say no to people, because I didn’t want to hurt their feelings that I didn’t want to be with them or do things with them. Also having the responsibly to take care of my cats and the love I had for them kept me alive at my dark moments when I had no will to live anymore; the cats saved my life more than once. My book probably would never come to be if I didn’t have and loved my cats. I do think the love we have is what transports us and our compass or guide in life. And so far cats and animals have been the only beings I feel save to express and share my love with. Cats are beautiful and fun! :-)

Thank you for writing and for your continued support.
Take good care,

Also, read my blog Experienced Knowledge
Posted by Sylvie at 10:56 AM