I Guess the Shoe Fits Him


The attached pictures express exactly what I am dealing with.
I went over their response and is full of lies. First of all, in the nine and half years I worked there, I had permission to have my laptop for personal use when not busy, and they gave me their own WiFi password, so I could use it on my laptop and I also used my personal laptop for work, because some residents communicated with me by email to let me know about their visitors and to access their emails I had to use my personal laptop.

Also, downtown office communicated with me by e-mail and for that, I also had to use my personal laptop.

I did my private work off duty, after work that's not illegal and the residents gave me permission to check out their gate keys. Matter of fact i was there today cat sitting for a resident and i checked out their gate key to go into their house. And as you know I was house sitting and living at S before working for S at the gate, so is not a secret that I did private work in the community.

P driven by jealousy is the bigger instigator, M B is an opportunistic that joined in on the plotting to bring me down because he wanted my job. I am starting to think MB was hired to come to work for me to spy on me and harass me emotionally to destroy me, he was part of their plotting! They are totally evil.

Anyway, P also over the years did some private work for some residents like house sitting. And some residents over the years expressed to me how pissed they were,  because she did it on company time,  which is true, and there is proof of that because she checked out residents house keys when she was working on company time. I never checked out residents keys in company time.  I was never violent with anyone and I am sure they have no evidence of such. Yes, i did express my concerns in writing that I was dealing with sociopathic behavior and you read that email, but never confronted anyone and I didn't call anyone a sociopath in person.

I am not sure what to do next, because I am dealing with very bad people, their goal is to destroy me and discredit me so they can keep their own lies and illusions intact.

Mr. K, the resident in the chair of security that I shared with the article about sociopaths, thinking he might help me. They say in the letter that he assumed I was calling him a sociopath. I guess the shoe fits him! Because as we NOW know, he was in on the plotting too.

Once while back he came to the gate and I had the TV on, it was on the CNN channel that was talking about the terrorism in the Middle East and he mentioned to me that the terrorism is solved by bombing all the Middle East, including women and children, kill everybody! And I told him: They think the same thing about us -- unless the whole society deals with the roots of what breeds terrorism here and aboard, always will be terrorism no matter how many wars we create and how many people we kill. Isn't this the talk of a sociopath?!

When they created the abusive and messy package receiving procedure, Mr. K came to the gate and I tried to explain to him how flawed their system was and he says to me: I am trying to protect you!

Trying to protect me my ass. I knew he was lying then and now there is proof that he was lying.

Every time someone tells me they are trying to protect me, it really means: I am trying to control you and repress you to manage my own fears. Just like I said in my blog They are Allergic to my Aliveness:  “And like my family they are using the same tactics by saying that is to protect me, but what they want to do is to put me in my place and show me who is in charge to manage their own fears and keep their own image, repression and little illusions intact. Just as Alice Miller says: “Conditioning and manipulation of others are always weapons and instruments in the hands of those in power even if these weapons are disguised with the terms education and therapeutic treatment.” For Your Own Good, P. 278

I shared the same article with another resident and this person didn’t assume I was calling her a sociopath, as you Know XX was not part of the plotting to destroy me. As you see by XX’s words below, she thanked me for sharing the article about sociopaths with her.


“This [article] is very interesting and thank you.  I started to tell you this morning that when she told ME who she would distribute, that irritated me… …I may also mention that in the 25 years I've been an S resident, we have never had our guard gate run as efficiently as it is at the present time.  I will ask him if the evidence of package abuse supports the severe response by the board  --- how many requests for a tighter process has he received from residents -- etc.  I will also suggest that since this action defies sanity, could there possibly be another motive somewhere lurking in the shadows?  It simply makes no sense unless they have info I've not rec'd!  Well, we'll see -- hugs, X”
I hope all is well with you and thank you for your attention,
Sylvie 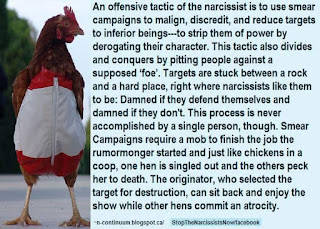 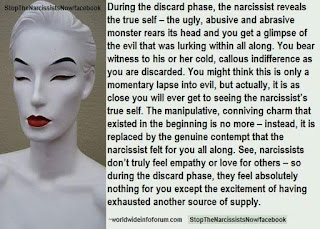 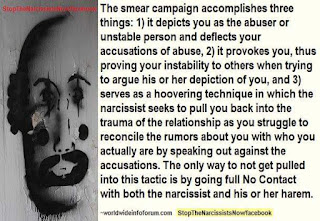 Monica Chelagat Too awake Sylvie ... that 'I am trying to protect you rings a bell too'! It is sickening to hear it from the foul mouth of an enemy, a wolf in sheep's skin. Expose them here Sylvie. I do it to other readers that may be going through that silent hell! Nature will take its course as I believe every action has a price or a prize.

Sylvie Imelda Shene Yes, I am too awake... I have no doubt that they will sooner or later meet their own future and destiny. When old age sets in and they no longer can run from themselves, and use scapegoats for transference effect to temporarily relieve their own repression and death gets close; they will be forced to face their own repression/hell and it's not going to be pretty for them, and no any amount of money will save them. I have worked in healthcare and witnessed a few rich people go through their own repression/hell before dying and I use to say to myself: money can't save you now. I would not want to be close by and witness these people's hell. I really feel sorry for them. 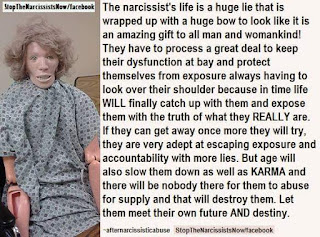 Monica Chelagat I am certain too. Have known people in my lifetime from their younger years to an old age and can see the difference between the decent ones how gracefully they age and the unscrupulous and unrepented ones how they are aging 'painfully' some looking empty and lost. This is the price and prize. It is pity not all are capable of understanding this life's logic. The sooner one comes to terms with this logic the earlier one regains mental health the more strength in dealing with any challenges ahead. You are fine Sylvie and am pleased I 'met' you thanks to Alice Miller's writings I got to your blog and your wonderful book! :-)


Sylvie Imelda Shene And no any amount of money will save them. I have worked in healthcare and witnessed a few rich people go through their own repression/hell before dying and I use to say to myself: money can't save you now. Me too I am grateful for Alice Miller's writing that helped me face and resolve my own repression and freed me to live my authentic life and to die free with a clear conscious.