Since writing this blog, exactly a year later, my ex-boss, who the property manager recruited to do her dirty work, killed himself in a standoff with the local police after robbing a bank on March 11, 2016, that by coincidence was my birthday! So, the property manager does have blood on her hands after all, because I know without a doubt, if she had not started this psychological warfare against me, he would still be alive – he was her collateral damage – when people start wars someone always gets hurt or killed!!! I was her target to destroy, but when was one of her helpers to lose his mind and self-destruct, everyone involved became silent, and now is a big cover-up that involves the FBI, the US Marshals, and the media. It's a shame he was not strong enough to stand up to do the right thing and let himself become a puppet of the property manager -- he paid a high price for it. Puppets never have a good end. If it was me, the little woman to commit a crime my name and face would have been splashed all over the news stations! And then all probably go on TV talking about how disturbed the little woman was -- to discredit me and my book -- and make a name for themselves by standing on my head. And all probably say that you need God in your life, my ex-boss was a Mormon, a man of God, but he was the one to lose his mind, but now is a big cover-up. I could see their dirty games and traps so clearly.
Read more in the link below:

In the excerpt below from the book Stalking the Soul: Emotional Abuse and the Erosion of Identity, by Marie France Hirigoyen articulates beautifully what S board, MB and Security Company did and are doing to me. They want to murder my soul like they own parents or child caregivers murdered their own souls so I will be soulless like them.

Most humans' souls have been murdered. They are laws against physical assault and physical murder, but soul stalking and soul murder is totally legal in our society.


"Physical violence can be testified to be outside evidence: eyewitness, police and medical reports. With emotional abuse, there is no proof. It's a clean violence. Nobody sees anything.

The Victim is Cornered


During the ascendancy of control phase, the emotional abuser essentially acted to inhibit his victim’s powers of reasoning and critical judgment. In the next phase, through a strategic series of commands, he provokes feelings, acts, and reactions.


If the opponent can “outdo” his rival in abusive defense strategies, the battle can only end in the surrender of the less perverse of the two.


The abuser tries to make the victim act against him so he can denounce her as “evil.” What’s crucial is that she seem responsible for what happened. He uses a weakness---a depressive, hysterical, or temperamental tendency--- over-exaggerates this trait, and then leads the victim on to discredit herself. Pushing the other into making mistakes allows the abuser to criticize and tear her down, but even more, reinforces her poor self-image and guilt.


When the victim loses control, the abuser simply injects a small dose of provocation and contempt to obtain a reaction and later reproaches her for it. If, for example, the reaction is anger, he makes sure that everyone sees it. On occasion, an outsider might even feel compelled to call the police. One even sees cases of abusers egging their victims on: “poor thing, you can’t expect anything from life; I don’t know why you haven’t jumped out the window!” It’s easy after that for the abuser to make the victim a mental case.


The victim needs to act, but because she is blocked by the hold over her, she can only find her freedom in an extreme gesture. To an outsider, any impulsive action, especially a violent one, is considered pathological. The person reaction to provocation seems responsible for the crises. Guilt in the eyes of the abuser; she appears like the aggressor to outsiders, who don’t understand that she can no longer live trapped in a horrible situation. Whatever she does, she can’t set herself free: if reacts, she is responsible for starting the conflict and is she doesn’t react, the deadly stalking of her soul continues.


As he drives his victim to destruction, the abuser gets that much more pleasure from pointing out her weakness or unleashing her violence. He makes her feel debased and unworthy. Depending on her reaction, she is described as temperamental and neurotic, alcoholic, or suicidal. The victim feels defenseless and tries to justify herself as if she were, in fact, guilty. The abuser’s pleasure double: he bamboozles or humiliates his victim and subsequently rubs her nose in her humiliation.


While the victim dwells on her guilt, the abuser benefits from the situation, making sure to cast himself as the victim.


Justification becomes impossible when nothing is said and no reproach is made. Desperate to find a solution to this horrifying impasse, the victim may be tempted in turn to use innuendo and manipulation. The relationship then becomes ambiguous: who is the abuser and who the victim.


The ideal outcome for the abuser is to succeed in making the other “evil,” which transforms the evil into something more normal because it is now shared. He wants to inject the other with what is bad in him. To corrupt is the ultimate goal.


His greatest satisfaction lies in driving his target to destructive acts or, in a larger framework, leading several individuals to finish each other off. (This is what S board did, they started the emotional harassment and now is leaving it to MB and S to finish it off)


All abusers, sexual or emotional, try to drag others into their orbit and distort the rules. Their destructive capability depends on the propaganda they disseminate among victims’ families, friends, and associates, showing to what extent the victims are “evil” and that it is, therefore, normal to blame them. Sometimes they succeed and seduce allies by ridiculing and scorning moral values. Not leading others into a circle of violence means failure for abusers and, therefore, becomes the only way to stop the spread of the abusive process.


From the book Stalking the Soul: Emotional Abuse and the Erosion of Identity by Marie –France Hirigoyen page, 120, 121 and 122

Yes, I had my soul stalked for over six months at my last job by pure evil people. The words below articulate exactly what happened to me!

Emotional abuse defined: "These are evil psychological assaults. This aggression arises from an unconscious psychological process of destruction consisting of either hidden or overt hostility on the part of one and sometimes several abusers toward a designated person; a real target in every sense of the word. It is effectively possible to destabilize or even destroy someone with seemingly harmless words and hints, inferences, and unspoken suggestions; usually, those close to the situation will not intervene. A narcissistic abuser grows in stature at the expense of the other; she also avoids any inner or spiritual conflict by shifting the responsibility for what is wrong onto the other person. If the other is responsible for the problem, wrong-doing, guilt and suffering don't exist. This defines emotional abuse."

"The very definition of emotional abuse is challenged by some who prefer to use the catch-all term of psychopathy."

""Whether the subject is serial killing or emotional abusiveness, the matter remains one of predatory behavior: an act consisting in the appropriation of another person's life."

-Dr. Marie-France Hirigoyen from "Stalking the Soul: Emotional Abuse and the Erosion of Identity" 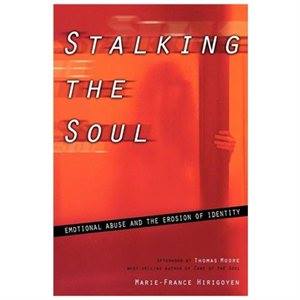 "Stalking the Soul" will illuminate emotional abuse in a way that will shake you to the core. Marie-France Hirigoyen has insight that is usually reserved for those who have walked the path. I was impressed with the depth of her knowledge of narcissism and the insidious and covert nature of the disorder. Emotional abuse is a double-edged sword because it is so hard to prove. You'll go crazy just trying. The abuser is careful to reveal himself only to his victim while showing his false self, the one that hooked you, to everyone else. Manipulation is second nature to the emotional abuser, allowing him to slowly and methodically erode your sense of self and to murder your soul. The latter being their goal. You have become their prey, some'thing' to conquer. I immensely appreciated and respected Marie-France Hirigoyen careful avoidance and rejection of blaming the victim. She shows in compassionate detail how it is your very strengths and talents that make you perfect prey to a narcissist, not your weakness, as so many other books on the subject will have you believe. Blaming the victim is just another layer of abuse and this author discredits that theory with a few strokes of her mighty pen. She appears to have an intimate understanding of the inner workings of a mental abuser and her knowledge flows freely from the pages directly to you. Where it is the abuser's goal to destabilize, Marie-France Hirigoyen is the friend who lovingly shakes
Read more reviews here

Tina Jensen Friis: Very interesting read about abusers and their ways, - how it will always be the victims fault and making the victim look like "the abuser", even a mental case to others, - a pointless battle where you ultimately must learn that people can think what they want - escaping and surviving the abuse is all that matters!
"The ideal outcome for the abuser is to succeed in making the other “evil,” which transforms the evil into something more normal because it is now shared. He wants to inject the other with what is bad in him. To corrupt is the ultimate goal.""The abuser is careful to reveal himself only to his victim while showing his false self, the one that hooked you, to everyone else. Manipulation is second nature to the emotional abuser, allowing him to slowly and methodically erode your sense of self and to murder your soul."The pain will always remain inside...

Sylvie Imelda Shene Thank you, Tina. Yes, the abuser’s goal is to succeed in making the real victim appear to be the “evil” one and therefore deserving what was coming to her. I lost my job, but she [the property manager at my last job] did not succeed in transferring her evil into me. The quote below describes beautifully what she was trying to do, she wanted to kill my soul and walk away wearing my skin. I shared more about my experiences and quotes in this link. 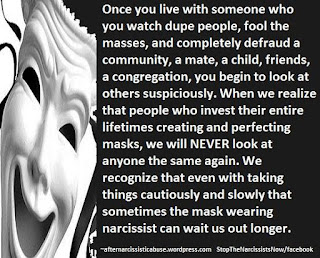 No, I will never look at anyone the same way! 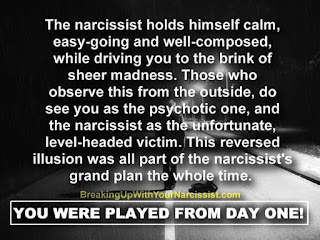 Yes, this reversed illusion was their plan. I could see so clearly the illusion they were trying to create and that's why I'm here to talk about it! I guess they didn't believe me when I said in my book A Dance to Freedom: Your Guide from Lies and Illusions. That I don't fall for illusions anymore! Free at last! They wanted to discredit me and my book, but they just gave more evidence that what I wrote in my book is the whole truth based on facts and evidence.

All malignant narcissists, sociopaths, and psychopaths love to play the victim card and make appear their real victims as the abusers, but when their targets are able to see clearly the games they play and articulate the real situation of what really is taking place; the targets of the malignant narcissists cease of becoming a victim.

"The unconscious compulsion to revenge repressed injuries is more powerful than reason. That is the lesson that all tyrants teach us. One should not expect judiciousness from a mad person motivated by compulsive panic. One should, however, protect oneself from such person." Alice Miller -- Breaking Down the Wall of Silence page 82