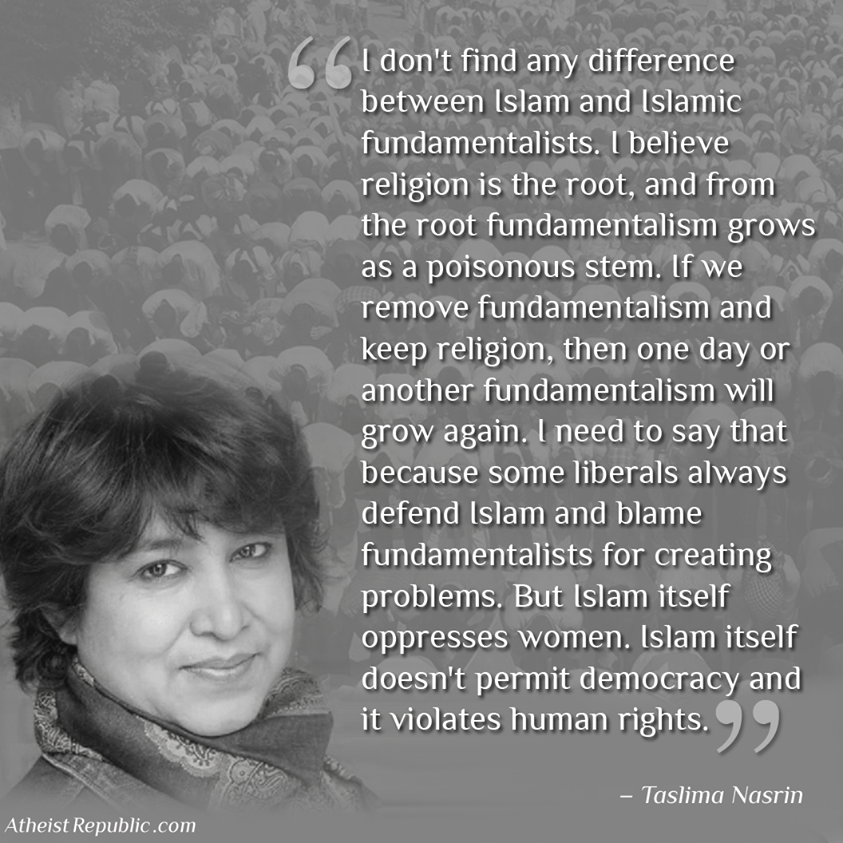 Taslima Nasrin's quote above could not be truer.

I also could not agree more with what Eiynah wrote in her open letter to Ben Affleck.

""I am Pakistan’s only sex blogger, I am also a woman. I am by default a lesser being within Islam. The fact that I talk about sex makes me even more worthy of disgust. Sex is not something easily discussed amongst muslims. And in the efforts of preserving our religious purity, we let some very immoral acts slide. Things that can often be justified by religious scripture. I speak to women every day who suffer under the religion of peace because they are not held as equals. There are things you can use to justify marital rape within the texts, and things you can use to justify pedophilia, there are things you can use to justify beheading infidels and apostates - just as ISIS does. That is not to say that ALL muslims are pedophiles, rapists or violent beheaders, or that Islam promotes these things. But if you are a person looking to justify such acts, you may find what you are looking for within the texts. Countless numbers of people suffer because of this, Ben.
Who will stand up for those people? In the interest of being politically correct and ‘liberal’ we silence the voices of millions. I am turning to you because you were instrumental in starting this conversation. Those of us who want reform are muted by extremists, as well as the liberals who betray us in the name of multiculturalism." Totally!
Read more:
http://www.nicemangos.blogspot.se/2014/10/dear-ben-affleck-words-from-woman.html?zx=92c80298fe07cb08

Most feminists and most liberals, just like my older sisters, are full of good intentions, but too scared to rock the boat and are too clueless that are driven by the repressed fears of the child they once were into repetition compulsion perpetuating the vicious circle to continue endless with their mask of love and pretenses. Causing much harm, and confusing and misleading millions of people with their illusion of love. Women AND men if they want to be free, they have to reject religion, all religions, because they all try to control us in one form or another. Maybe some have become more sophisticated and use mastered mind controlling techniques to manipulate us into submission and don’t go to the extreme of using extreme violence, but all screw us to a degree in one form or another.