Thank you for your understanding words. I could not stop crying while reading your e-mail.

I have lost cats before, but I don’t think I felt this sad before. We did have a special bond – we were in love with each other -- I have not cried like this in years -- It makes me think how short life is and how fast it can be over.

It took me a lifetime to liberate myself and create a home for myself. I’m looking forward to retirement and just spent the rest of my life with just me and the beings I love most, but it makes me think how fast all it will be over. Now that I have created a home for me and I’m emotionally free -- I wish I could live forever and now Sutti reminded me how all can be over in a blink of an eye.
Today at 5:30 pm will be a week Sutti is gone. I wish these last 3 years she lived with me I was already retired so I could have spent more time with her. I wanted more time with Sutti.

And how sad it is that most people never get to experience emotional freedom and be at home with themselves.

This world should be a heaven for us but instead is full of dangerously repressed people or sociopaths/psychopaths suffering and making others suffer – unconsciously and compulsively looking for scapegoats – which we have to be constantly on the lookout for, especially in the workplace!

Only when truth and love is our first goals in life --  truth and love has always been my first goals --  and everything else has always been secondary for me -- when we stand for truth and truly love ourselves and share it with another living breathing being -- will the floodgates to the repressed emotions will be open to flow in  a healthy way -- to be consciously felt within the context of our own childhood -- without using others as scapegoats to temporarily and superficially alleviate the repressed emotions of the child we once were. Everywhere I go I just see people going around like robots masquerading with the illusion of love and covertly and silently manipulating others with their illusion of love.

My childhood and teen years were the saddest, most of my adult life was a struggle, but I accomplished emotional freedom and now the consolation I get is that in my retirement years that I hope will be many, I know, they will be the most beautiful years of my life and wish Sutti could be with me for many of them to enjoy with me.

You too, take good care, as much as possible.

I don't know, how to react or to give some comfort in your sorrow...
How you and Sutti met and you became the closest mates, seems like a kind of fairy tale, right? She chose you... and so did you...

Such a sweet story,  no doubt this is a unique experience...

Looking at her picture, i see such a so beautiful, kind and peaceful being!
I  just can be with you in sadness and crying.  What a bad fate, that she had to die too early by a virus...

I am sorry, I have to go to work soon, but will write more soon.
Sylvie, I give you a big hug and share your feelings.
Take good care and let the tears flow, as long as they need to flow.
Take good care, as much as possible
J

I hope you are hanging in there and not so busy with some extra free time for yourself.

Last Saturday my favorite cat, Sutti passed away suddenly, caught a virus and stop eating and drinking and she was gone overnight.

I'm so devastated I don't have Sutti anymore, she was about 8 years old, but I only had her for about 3 years, she appeared on my back patio and I used to put food and water for her out there and I even made a shelter for her to stay warm in the cold days  of winter, she lived outside at least 3 to 4 years, but every time I went in the patio she would run, but one day when I called her, she came to me and came inside and never wanted to be out again alone, would go in the patio with me and sit in my lap, but when I went inside she would follow me in, she was the sweetest cat I ever had and was so grateful for me taking her in  -- she wanted to be next to me all the time loving me with her very soft and gentle little kisses. I always looked forward to going home to be with her. The house feels so empty without her.

I just wanted more time with her -- three years was not enough -- I wish I could hold her and touch her silky soft coat one more time.  My work has been so busy and plus doing a lot of side jobs checking on house and cat sitting for people that are away that I don’t have time to be with my feelings and feel my sadness.

I cry when I’m in the car driving to my jobs and I crying going to sleep at night and when I wake in the morning. If was any of my other cats to pass I would not be this sad.

Sutti was my special Kittie.

I like to find another Kittie like her but I know there are never two beings alike even if they look alike, personality is never the same. It will never be another Sutti like her.

I hope the next time I write my heart is no longer this sad. 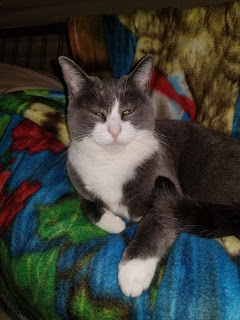 A facebook friend shared this article on my newsfeed  Had Enough Therapy?

Thanks for sharing this article, J-F B! Very interesting! To this day I have not met a single mental health care professional that can provide real assistance in helping people liberate themselves from their emotional prisons. And the real reason is that most of them lack the courage to tell themselves and their patients/clients the truth and without the truth, liberation will never be possible. But instead, use their intellectual knowledge in psychology to mess and manipulate people’s minds and behaviors -- making things worse by thickening the walls of people’s emotional prisons and making it near to impossible for people to ever free themselves.

Just like I wrote in my book A Dance to Freedom:

“The chain of harm done by doctors, therapists, and gurus under the guise of help is endless. Alice Miller believed that most people with a “Dr.” in front of their name or a “Ph.D.” at the end of it weren’t in any kind of position to help or guide anyone, especially if they were repressing their own traumas and creating their own illusions.

For many years I blamed myself for what happened with Dr. Julio Machado Vaz. It took me more than two decades to see the truth and speak about the fact that this doctor had exploited my anger at my family to feed his sexual perversions and abuse me sexually, instead of helping me work through and resolve my anger.

…I’ve touched on this a lot in this chapter and elsewhere in this book, particularly in the section about Dr. Julio Machado Vaz — the psychologist who used me for sex — but I really want to reinforce the idea that so-called therapists and gurus only substitute one dangerous illusion for another. As Alice Miller writes,

“What can happen when a doctor doesn’t stop at self-deception in his flight from pain, but deceives his patients, even founding dogmatic institutions in which further ‘helpers’ are recruited to a faith advertised as scientific truth,’ can be catastrophic.

…Most people who search for answers never actually find them, because people suffering with their own repression are the ones who practice traditional therapies.

Since the beginning of human history, priests, teachers, gurus, psychics, doctors, philosophers, and psychologists have all duped people into thinking they could provide real assistance when it was never possible because the healers were also victims of their own childhoods.

Alice Miller saw the promise of psychotherapy to help people understand why they behave like helpless victims as adults and also to help them take responsibility for their actions.

But she was disillusioned when she realized that practitioners couldn’t treat patients effectively as long as they failed to deal with their own repression.”

Because I'm critical of the mental health community, in general, this is one of the reasons I got targeted also by a mob of very corrupted people at the community where I worked for nine and a half years – some residents were doctors and professors --  and to protect themselves and the medical community, they thought with their methodical and very well-orchestrated psychological warfare could get me to self-destruct to protect themselves from being exposed for the fraud that they are, but coming after me they exposed themselves and  proved what I write in my book is true and gives me and my book more credibility.
https://www.facebook.com/sylne/posts/10156647567313922?notif_id=1563048486584735&notif_t=share_wall_create