When Our Trusted Storytellers Are Also the Abusers

"When Our Trusted Storytellers Are Also the Abusers

For decades, the journalists Matt Lauer, Charlie Rose, Bill O’Reilly and Mark Halperin appeared in front of cameras and tried to help Americans understand the country and one another. Now that they’ve lost their jobs after multiple accusations of sexual abuse, we are left wondering what they taught us." Read more HERE

A, are you ever going to see that this is why it's so hard to get the mainstream media to pay attention to my story? Because mainstream media is mostly run by malignant narcissists or sociopaths. Also, this is why I was the target of a mob of sociopaths at my job of nine and half years -- after I published my book -- because my book removes the pretty masks people wear and triggers their fears of exposure.  They rather destroy others than look in the mirror and face themselves.

I googled my name this morning and my name and book are mentioned so many times on great wide web!

I don't have time to read everything, but so far, I  have not read one negative thing about my book anywhere!

The only people that have problems with my book are sociopaths, malignant narcissists or psychopaths, that's why they target me, because my book triggers their fears of exposure. What they fear most is losing control and exposure.

They want to destroy me to protect their pretty lies and illusions. Now, that their were not able to break me or destroy me, they are all silent, they don't dear write anything negative about me and my book, because they know I speak the naked truth, their silence speaks volumes.

In many places on the wide web, people write A Dance to Freedom by Ed Sweet with Sylvie Imelda Shene, People have a tendency to give more credit to men than to women, sad truth.

Anyway, I found this great review of my book in a German site! I took a screenshot of it! In order to read it in English, you have to click on the google button that says: translate this page. 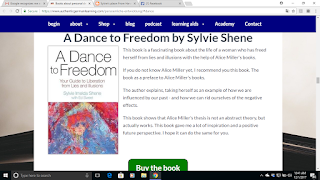 "If you do not know Alice Miller yet, I recommend you this book. The book as a preface to Alice Miller's books.
The author explains, taking herself as an example of how we are influenced by our past - and how we can rid ourselves of the negative effects.
This book shows that Alice Miller's thesis is not an abstract theory but actually works. This book gave me a lot of inspiration and a positive future perspective. I hope it can do the same for you." Read more HERE

Sooner or later my book will reach the masses and the sociopaths can try, but they can't stop it.

11 Ways to Spot a Psychopath at Work

"At the outset, these qualities are often mistaken for leadership but as time goes on these people remorselessly manipulate, charm, lie and bully their way into favor, often creating highly successful careers for themselves while leaving a wake of destruction and broken spirits in their path. But not every successful, high-energy, intelligent, charming and persuasive person is a psychopath."  Read more HERE

I can't wait to write "Reenactment" and I will leave this earth as the author of two very important books ever written about the human mind that proves Alice Miller's thesis is not abstract theory, but actual facts that work.